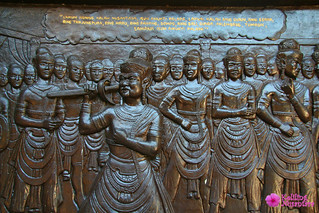 Trowulan is a plateau that lies between the end of the three mountains in the eastern part of Java, namely Mount Penanggungan, Mount Welirang and Mount Anjasmoro and the northern coast of Java, precisely in river delta of Berantas, an strategic area and fertile, Trowulan’s situation fits the Chinese literature that says that in order to reach the capital of Majapahit had to pass through a winding river. Trowulan currently located in the border of Mojokerto regency and Jombang, can be reached about 1 hour road trip to the southwest of Surabaya. There are several alternatives transportation to get to Trowulan, you can drive from the city of Surabaya by bus or by private vehicle, we highly recommend that you use a private vehicle to visit this site because the spots you should visit at  Trowulan located relatively far apart from one another, using private vehicles will allows you to reach every spot that you want to visit easily.

Trowulan is a fertile agricultural region, located in the delta of the Berantas river, this make farmland cultivated throughout the season, in addition to farming, community of Trowulan also develop craft of clay, stone and metal for a living, during a visit to Trowulan we found many manufacturing industries bricks as one of the staples of residential buildings, the industry can be found in almost every corner of the village in Trowulan, stone carving crafts, metal processing and manufacturing of terracotta is also found in this area, especially in the Kedungwulun hamlet of Bejijong village. Much of the literature relates that in his time the capital Majapahit was famous by handicraft industry, it seems that heritage is still maintained until now.

In addition to these facts, there is no doubt that the modern manufacturing industry also started plugging massive influence, there is a shift in mindset and the fact that people can not be avoided, that there are many factories operate around them, this is a challenge for them to maintain the local values ​​and a long tradition in order to continue to provide benefits or go with the flow of modern industry which is slowly but surely eroding their cultural heritage.

We are planning an overnight stay in Trowulan, but after seeking information from local people about the hotel or inn location, they told me relatively far from the location of the temple sites, but we were very lucky that day, when we accidentally ate lunch at a stall that sells meatballs, Mom shop owner offered us to stay overnight at his home, a modest house that has not been completed, we are welcome to occupy the front room with a cot mattresses, that night we rested at that family’s home. Throughout the conversation, Mr. and Mrs. home owner telling about their livelihood ever be a brick craftsman, then when Trowulan began to be developed into tourism region they start to stall Meatballs and lasted until now, the husband himself has a busy cultivating duck besides setting up manufacturing vitrified meatballs. When we wake up in the morning they serve hot coffee, hm .. frankly we became very shy, especially when we give money in exchange for rental room when we said goodbye, the family politely refuse as he said if another opportunity came to visit back here, do not forget to stop by their house. We were amazed by the simplicity and their selfless actions, for us this is an evocative experience and unforgettable. 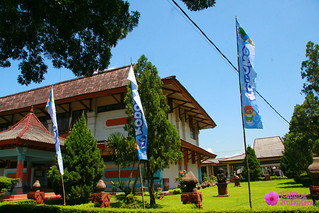 Trowulan area during Majapahit era was capital complex, neatly arranged in a symmetrical pattern, it is proved by the fact of discovery of many relics of ancient residential buildings, presumably still many undiscovered archaeological remains, Trowulan area sterilization is difficult to be realized due the sites become one with the region residential land and livelihoods, there is a museum in Trowulan to publish archaeological findings derived from Majapahit empire and earlier empires such as terracotta, clay craft materials, weapons and jewelry were used by the royal courtier, also temples as symbolic reminder of the events that was built by Majapahit and even by earlier empires.

As befits a city of the past, in Trowulan found not only a complex of residential buildings and temples, but also the legacy of public buildings such as baths (Tikus Temple), soldier training ground pool (pool Segaran), Public cemetery and some petilasan, among others Petilasan Mahapatih Gajah Mada, Petilasan Raden Wijaya the founder of Majapahit Kingdom, Petilasan of princes Campa and Damarwulan, there are Islamic cemetery  which proves that the influence of Islam has been entered in the Majapahit era.

Admire the great civilization in its era, witness the legacy, imagine the life stories of people who are involved in it, to understand and explore more closely the archaeological facts can give different nuances to the understanding of our history. 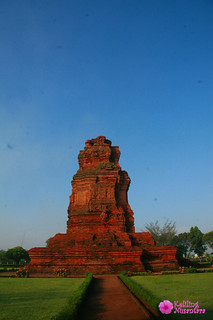 Temple is a typical building of kingdom heritage monument that existed in southeast Asia during the classical period, its presence in almost every island in the archipelago including the surrounding areas, namely Borobudur and Prambanan in Central Java, Angkor in Cambodia and more smaller temples thousands of them. Majapahit relics sites in Trowulan has many temples scattered in several locations, such as Tikus Temple, Bajang Ratu Temple, Brahu Temple, Kedaton Temple, Wringin Lawan temple and more temples are deliberately not been renovated since its original construction is unknown like Gentong temple.

The temple has a sturdy structure, so this building can last relatively longer than in other types of buildings, usually constructed as a symbolic monument of certain events, or some are built for functional purposes.

Although the heyday of Majapahit had long gone swallowed up time, but as a great civilization, he still has a cultural heritage that we can still see and learned today. Trowulan communities around the region are still many who preserve tradition craft derived from the Majapahit, among others, chiseling bricks and metal processing as well as typical Majapahit batik weaving, batik motive derived from the Majapahit period can be found in Trowulan one of them is batik with shades stating the solar circle symbol of Majapahit mixed with spilled rice motive.

Of course his greatest legacy is greatness history that gave the inspiration for the founding father of this nation to realize the unity of the archipelago, that we know the word archipelago is originated from Majapahit to the conception that is in the past, this conception may have shifted, but we can still find said it remains relevant in the context of today’s modern world.

We did not watch an performances by local cultural attractions directly, but according to the narrative of some people we met, in Trowulan there are many typical dances that are still preserved by some group people, occasionally they will perform at major events held by the government or public who hold urination, complete with drummers dance music. Although we did not get to witness firsthand the staging of the attraction, at least we see them practicing dance training in one of the houses near the Mr. And Mrs. of meatball sellers where we spend the night.

Conservationists cultural attractions has faced tough challenges with modernism rapidly changing local cultural values, yet another side benefit will be functional and play a role to make them stay afloat. If they are not creative to package and integrate the cultural attractions with the values ​​of a society that is constantly changing, to be sure that later these cultural attractions will be abandoned and forgotten. This is where the role of government to be significant, they have a responsibility to encourage preserving cultural heritage by providing a new conception and innovative training on the one hand and promoting awareness to the society for historical tourism so that all communities involved in it can give and receive the benefits of these interaction.

Trowulan can be reached by private vehicle or public transportation takes about 1 hour from the city of Surabaya. You can take a bus from Surabaya to Mojokerto bus station or directly down on Trowulan. Then from terminal Mojokerto ride public transportation to Trowulan, than you can rent motorcycles heading to some temples it is about 2-3 kilometers. You can also use the train from Jogja to the Mojokerto about 6 hours. Arriving at the station you are heading Mojokerto Mojokerto Kertajaya Bus Terminal. From there, ride tricycles with IDR. 15,000 tariff, or about 45 minutes walk. At the bus terminal Highway Trowulan definitely pass. Enough to pay IDR 2,500 per person for the purpose Trowulan about 15 minutes or 12 miles from the town of Mojokerto. To get to the museum in the Trowulan You can achieve it using all Trowulan transport by highway or road district not far from the pond Segaran.

You can find restaurants lined up in front of the pool Segaran. Menu, of course typical wader Mojokerto like fish, hot rice, vegetables, tomato sauce, and a young coconut. Culinary specialties in Trowulan is Sambel Wader, namely “iwak wader” (small fish that is in the river) are fried and served with chili sauce and fresh vegetables. Also of course there are other East Java culinary such Rawon and Soto. The price is pretty cheap less than IDR. 10,000.