Argopuro Trekking – The longest trekking field in Java Mount Argopura is a former active volcano has an elevation of 3,088 Metres which is part of the mountains located in the Regency of Iyang Probolinggo, East Java and in the supervision of Sub BKSDA (Conservation of natural resources) is locality Jember. Mount Argopuro mountain is […]

Surabaya City Tour Surabaya is the second largest city in Indonesia after Jakarta, with a metropolis population reached 3 million, Surabaya is the center of business, commerce, industry, and education in eastern Indonesia. Surabaya known as City of Heroes as a highly regarded history in the struggle for Indonesian independence from the colonizers. Surabaya word […] 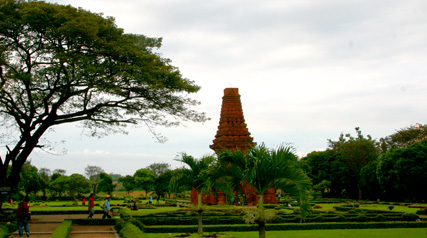 Location Trowulan is a plateau that lies between the end of the three mountains in the eastern part of Java, namely Mount Penanggungan, Mount Welirang and Mount Anjasmoro and the northern coast of Java, precisely in river delta of Berantas, an strategic area and fertile, Trowulan’s situation fits the Chinese literature that says that in […]

Request custom tour
You cannot copy content of this page