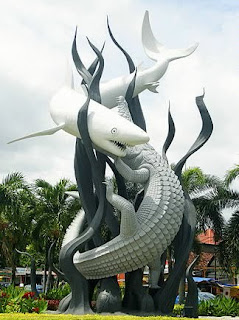 Surabaya is the second largest city in Indonesia after Jakarta, with a metropolis population reached 3 million, Surabaya is the center of business, commerce, industry, and education in eastern Indonesia. Surabaya was known as City of Heroes as a highly regarded history in the struggle for Indonesian independence from the colonizers. Surabaya word supposedly comes from a battle between the mythical story of Sura (shark) and Baya (crocodile) and eventually became the city of Surabaya.

The combination between the metropolis and the value of history is very thick making Surabaya as one tourist destination always remains interesting and worth visiting, at least there are some monumental places that we can visit to get to know more closely Surabaya. In the event this trip we present the most representative places to visit in order to know the historical context of Surabaya in the past and the present Surabaya metropolitan city, among others:

This monument is a memorial monument symbol of Surabaya city that symbolically is a city of hero, it has a very important role in the independence of Indonesia and Surabaya closely with him. This symbol was built to commemorate the events of 10 November 1945 in which the people of Surabaya and surrounding cities bravely against the Dutch military aggression and won the battle even though a lot of lives that have become victims.

Bambu Runcing is one of the traditional weapons used by the freedom fighters against colonialism. As the importance and generally use of the weapons in the past, the government built a monument of Bambu Runcing in Surabaya symbolically to visualize that the city of Surabaya is a city of heroes and symbols and historical value of the Indonesian nation epic.

As the name which is initials of Surabaya and Madura, this bridge connects Java and Madura at Madura Strait, the construction of this bridge represents the metropolitan of Surabaya and it’s ambition of development to be accomplished with surrounding city strut. Suramadu bridge in the evening has an exotic panorama with a beam of light that illuminates the body of the bridge along the 5,438 m.